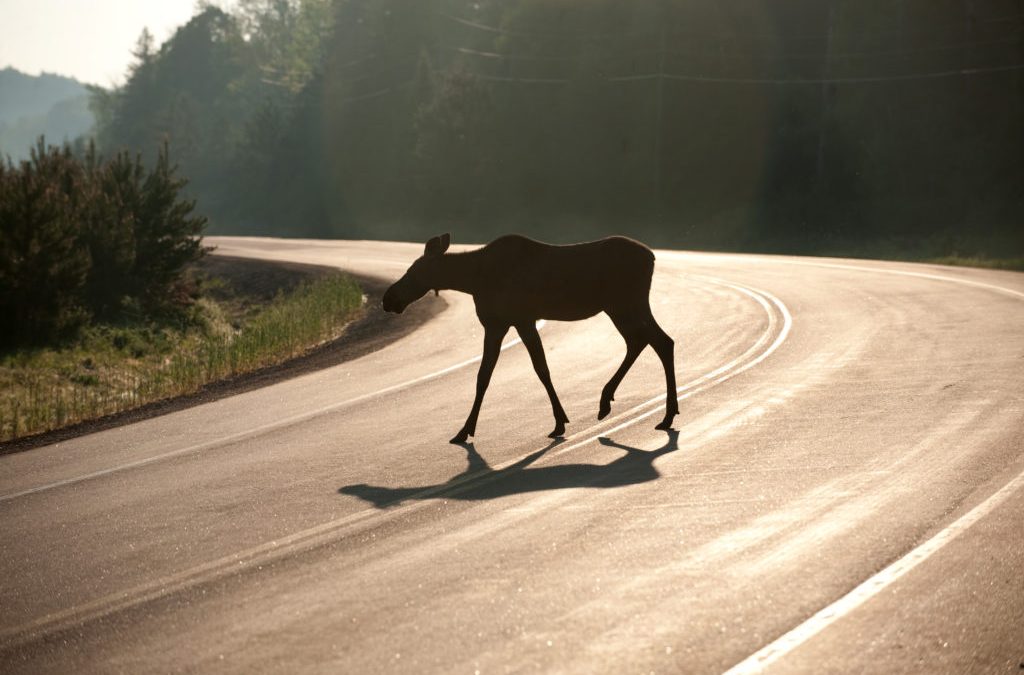 Late one evening a young woman and her friends were traveling on a rural road. As they were traveling, the driver’s headlights revealed a small animal in the middle of the lane. Trying to avoid the collision with the animal, the driver swerved to the right. This reaction caused the driver to then over correct in the opposite direction, rolling the vehicle and ejection two of the passengers. Even though the vehicle was completely totaled, no one was killed.

In Utah, we are blessed with an abundance of wildlife and rural roads. But this blessing can also have fatal consequences. In 2014, there were 166 deaths caused by collisions with animals in the United States. Even more shocking, an estimated 1.25 million insurance claims resulted from animal collisions or accidents caused by swerving to miss the animal. Although hitting an animal can be fatal, most crash deaths occur in subsequent events when a vehicle runs off the road. As personal injury attorneys, we feel it important to educate our community to help your split second decision making process when you see an animal in the road.  Size Matters.

According to the Insurance Institute Highway Safety (IIHS), drivers are generally safer by hitting an animal instead of swerving to avoid it. However, the size of an animal compared to the size of your vehicle matters. A good general rule is: if the animal is shorter than the hood of your car and you don’t have time take evasive action, keep driving; but if the animal is taller than the hood, you can try to avoid it, but it still might be better to hit the animal.

The two most important ways to avoid a deer-vehicle collision are: slow down and SLOW DOWN. If you are driving through an area known for high deer populations, slow down and observe the speed limit. The more conservative you are with your speed, the more time you will have to brake if an animal darts into your path.  Always wear a seat belt. The most severe injuries in deer-vehicle collisions usually result from failure to use a seat belt.  Watch for the shine of eyes along the roadside and immediately begin to slow.
Use your high beams whenever the road is free of oncoming traffic. This will increase your visibility and give you more time to react.  Deer can become mesmerized by steady, bright lights so if you see one frozen on the road, slow down and flash your lights. Some experts recommend one long blast of the horn to scare them out of the road, as well.
Pay close attention to caution signs indicating deer or other large animals. These signs are specifically placed in high-traffic areas where road crossings are frequent.  If you’re on a multi-lane road, drive in the center lane to give as much space to grazing deer as possible.  Never swerve to avoid a deer in the road. Swerving can confuse the deer on where to run. Swerving can also cause a head-on collision with oncoming vehicles, take you off the roadway into a tree or a ditch, and greatly increase the chances of serious injuries.
“Deer are unpredictable creatures.”

One that is calmly standing by the side of the road may suddenly leap into the roadway without warning. Slowing down when you spot a deer is the best way to avoid a collision. However, if one does move into your path, maintain control and do your best to brake and give the deer time to get out of your way.  Don’t rely on hood whistles or other devices designed to scare off deer. These have not been proven to work.  If you do collide with a deer (or large animal), try to let off the brakes at the moment of impact. Braking through the impact can cause the hood of your vehicle to dip down, which can propel the animal through the windshield.
Now, when you are contemplating whether to swerve or to hit the animal, experts advise not swerving. You can suffer more ghastly consequences from an oncoming UPS delivery truck than from a leaping mule deer or skittering antelope. It is best to lock the brakes, jam the horn, and (if time allows) duck low behind the dashboard.  Moose are the lone exception to the do-not-swerve rule. An adult moose can grow to 1,600 pounds. Consequently, colliding with a moose is comparable to colliding with a compact vehicle on stilts, with the likelihood of fatal or long-term injuries to the front-seat occupants of your car. So if the situation allows, swerving for a moose is a defensive option.

(Disclaimer: The information in this article was obtained from various sources. While we believe it to be reliable and accurate, we do not warrant the accuracy or reliability of the information. These suggestions are not a complete list of every loss control measure. The information is not intended to replace manuals or instructions provided by the manufacturer or the advice of a qualified professional. Nor is it intended to effect coverage under any policy. State Farm makes no guarantees of results from use of this information. We assume no liability in connection with the information nor the suggestions made.)